The Foundation Preparation Pallas-reactor (PALLAS) has selected the Argentinian-Dutch company ICHOS,  (INVAP and the TBI companies Croonwolter&dros – Mobilis) for the design and construction of the state-of-the-art PALLAS-reactor. From 2025 onwards PALLAS, one of the world’s leading suppliers of medical isotopes, will play a crucial role in the supply chain for radiopharmaceutical products worldwide and in nuclear technology research. With the radiopharmaceutical products millions of people with cancer and cardiovascular diseases can be diagnosed and treated.

PALLAS will replace the almost sixty years old High Flux Reactor (HFR) in Petten, 50km north of Amsterdam in the Netherlands. The project’s contract value amounts to up to € 40 million for the current preparation phase up to several hundred million euros for the consecutive phases.

On Wednesday 24 January 2018 Hermen van der Lugt, CEO of PALLAS, Vicente Campenni, CEO of INVAP, Lennart Koek, Director of Croonwolter&dros B.V. and Robert Jan Feijen, Director of Mobilis B.V. signed the contract agreement in The Hague. The agreement was signed in the presence of Alberto Weretilneck, Governor of the Province of Río Negro, Héctor Horacio Salvador, the Ambassador of Argentina, Bas van den Dungen, Director-General Curative Care at the Dutch Ministry of Health, Welfare and Sport, representatives of the Dutch Ministry of Economic Affairs and Climate and Jaap Bond, Vice-Governor of the province of Noord-Holland. 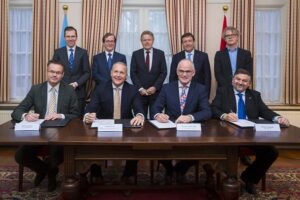 Rationale for PALLAS
In European hospitals, seventy percent of isotopes used for diagnostic procedures (e.g. cancer, cardiovascular diseases) and for treatment, originate from the current reactor in Petten. Globally, this percentage is approximately thirty percent and in the Netherlands it is as high as eighty percent. To guarantee the long term reliable supply of a wide range of medical isotopes, in 2012 the Dutch government decided to replace the HFR. The PALLAS organisation was founded on December 16, 2013, with the purpose to design and construct the reactor, to obtain the necessary licences, to develop a solid business case and to arrange private financing for the construction and commissioning phase of the PALLAS-reactor.

Bas van den Dungen, Director-General Curative Care at the Dutch Ministry of Health, Welfare and Sport: “We are pleased that PALLAS takes a significant step by selecting the designer and constructor for the PALLAS-reactor. Almost 30.000 patients a day worldwide undergo research or treatment using medical isotopes produced in the HFR at Petten. The continual availability of these isotopes, and the guarantee that they can be supplied at any given moment, is crucial for many people, sometimes even a matter of life and death. Besides the guarantee of medical isotopes the Netherlands can also continue to play a key role in nuclear medicine research development and PALLAS is of great importance for employment for the Province of Noord-Holland.”

Tender process
In 2015 PALLAS started the negotiated tender procedure for the design and construction of the PALLAS-reactor under EU procurement guidelines. Three pre-qualified consortia – led by the Argentinian INVAP, the French TechnicAtom and the South-Korean Kaeri respectively – could, after a series of intense dialogues, proceed to the next stage in January 2017 of the formal procurement process. After several rounds of bidding and negotiation the combination of the Argentinian INVAP and the Dutch TBI construction and installation companies Croonwolter&dros and Mobilis offered the best solution for a safe radioisotope production facility for nuclear medicine. INVAP has wide experience in nuclear projects such as the OPAL reactor in Australia and has proved to be a highly capable company which guarantees safety and the successful completion of the projects while meeting the established deadlines and adhering to the budgets agreed with its customers. The TBI companies have lots of experience with complex multidisciplinary work and project management in the infrastructural and industrial markets.

Juan Pablo Ordoñez, chairman of the board of ICHOS, expressed the total commitment from INVAP and TBI companies Croonwolter&dros and Mobilis to this exciting and challenging project, which will allow the continuity of the nuclear medicine practices in the Netherlands, and enhance the international cooperation between Argentina and the Netherlands.

The PALLAS-reactor is a pool-type reactor, which is able to deploy its neutron flux more efficiently and effectively than the current High Flux Reactor resulting in significant lower thermal power. The most important feature of the PALLAS-reactor is its operational flexibility. The core of the reactor can be set up very flexibly for production of various (new) medical isotopes and hence respond to changing markets. In the next two years the design of the reactor will be further developed and optimized resulting in a design that can be submitted for approval by the regulator. At the site in Petten (NL), around 1.7 hectares is used for the reactor, several smaller supporting facilities for cooling, electricity supply and facilities for employees and visitors.

Public-private
The financing of PALLAS consists of two phases: a publicly funded phase followed by a privately funded phase. For the publicly funded phase the Department of Economic Affairs and Climate, together with the Province of North-Holland, provided a loan of 80 million euros. The selection of the design and construction belongs to the first phase.

The second phase, the construction and commissioning of the PALLAS-reactor, is planned to be financed privately. This requires the presentation of a solid business case. By the end of 2017, the business case of PALLAS has been further elaborated and a start has been made on approaching future customers. PALLAS is also in discussions with potential investors and is attracting the interest of serious international private investors.

PALLAS in brief
The Foundation Preparation PALLAS-reactor (PALLAS) aims to realise a state-of-the art multi-purpose reactor, designed for producing (medical) isotopes and for conducting nuclear technology research. This reactor is to replace the current High Flux Reactor (HFR) in Petten (NL). PALLAS was founded on December 16, 2013 with the purpose to prepare a design, to obtain the necessary licences and to arrange private financing for the construction and commissioning phase of the PALLAS-reactor. For the first phase the Dutch government has granted a loan of 80 million euros. From 2025 onwards PALLAS, one of the world’s leading suppliers of medical isotopes, will play a crucial role in the supply chain for radiopharmaceutical products worldwide and in nuclear technology research. With the radiopharmaceutical products millions of people with cancer and cardiovascular diseases can be diagnosed and treated.

INVAP in brief
INVAP is internationally recognized as a reliable and up-to-date nuclear technology supplier. It has become a member of the leading group in building multi-purpose radioisotope production reactors. The Argentine company has clearly achieved a high competitive level, such that it exported the OPAL-reactor to Australia. The experience with Australia showed that INVAP is able to win an important and competitive tender (200 million U.S. dollars in the year 2000) and to meet the established deadlines and fully comply with its customers’ requirements. Australia expressed its complete satisfaction with the company and mentioned it in many international scientific forums and conferences in which it took part.
INVAP has also designed and built low orbit Earth observation satellites, industrial plants, radar systems and radiotherapy centers, among other developments.

Croonwolter&dros in brief
For more than 140 year Croonwolter&dros has been in the vanguard of new developments. Also in this day and age, where electrical engineering is increasingly important, we stimulate new technical developments. We have the knowledge, experience and the workmanship to create intelligent systems and integrated sustainable solutions, to develop them further, implement, maintain and manage them. Our motto, “Intelligence through Technology” is the driving force for intelligent technical solutions for electrical and mechanical engineering, automation and information solutions that support our clients in sustainable entrepreneurship. These intelligent, self-thinking and self-learning cognitive systems make processes in or objects like ships, tunnels, buildings and factories more efficient and effective.

Mobilis in brief
For more than 130 years Mobilils offers, as a civil constructor, solutions within the field of infrastructure, water and industry. Our overall mission is to establish a sustainable and transparent relationship with clients and cooperating parties to find creative solutions in all project phases in the most innovative, cost-efficient and effective way.
Mobilis is a component of TBI and as independent company specialized in contracting and executing civil engineering projects. TBI is a group of companies that modernises, organises and maintains our living environment in a sustainable way.