There are only a few (old) reactors worldwide that count for the lion’s share of medical isotope production. In 15 years 75% of the reactors need to be replaced.

A large-scale producer of medical isotopes is located near Sydney, Australia: ANSTO. The OPAL reactor is relatively young (over 10 years old).

Europe traditionally plays an important role in the production of medical isotopes by reactors. Not only are there various reactors contributing (mainly in the Netherlands, Belgium, Poland and Czech Republic in 2017) but there are also two molybdenum processing facilities in Europe (in the Netherlands and Belgium). The FRM2 reactor in Germany and the JHR in France are currently under construction. These reactors will many focus on different types of research.

The Netherlands occupies a special position in Europe: not only is the Netherlands currently the largest producer of medical isotopes in the world, along with Australia it is also the only country that has the reactor and the molybdenum-processing facility in the same location. This offers many advantages, not least the fact that radioactive materials do not need to be transported by road. As transportation times are non-existent, the yield of the entire production process is also higher (less decay of molybdenum during the process) and this results in less waste.

In Africa, only the SAFARI reactor in South Africa – in combination with NTP Radioisotopes, both in government hands – is globally active in the production of medical isotopes.

In Russia, China, Korea and Argentina, the production of medical isotopes takes place on a small scale, using reactors. These countries produce only for the local market, which is still small. 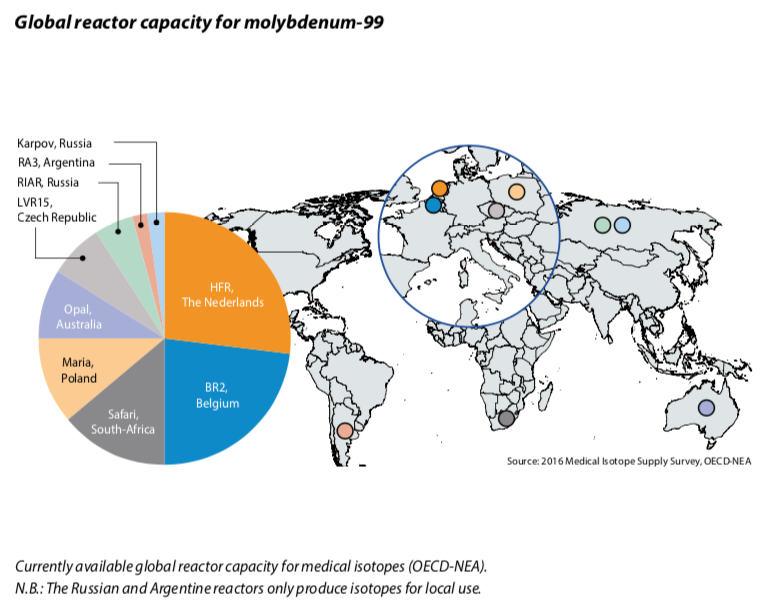